Cameo Wood talks about “Working Blind for a Year (Intuition Really Helps)” in this episode of the Intuitive Leadership Mastery Podcast, with host Michaela Light.

“To your balances, those marketing, and those artistic vision at them having a good intuitive sense of am I being true to myself, am I being true to my storytelling. But am I also not making a movie that no one will ever see, and will not ever make money. Like you have to figure out that balance.” – Cameo Wood 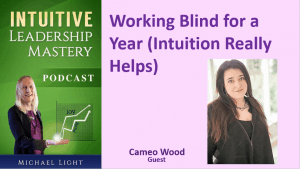 Cameo wrote, produced, and directed “Real Artists”, a narrative thriller about Artificial Intelligence and the future of filmmaking. Cameo Wood fell in love with movies at the age of seven when she saw Amadeus on the big screen, and she has been making films ever since. At the age of ten, Cameo began writing epic adventures, and shooting scenes on still photos. She began her film education when she was 12 and worked full time at the family video store and was a camera operator and editor for the weekly high school television show. Originally from Pittsfield, Massachusetts, she now lives in San Francisco.

Her first for into directing, writing, and producing, Wood has more in store for us in the future, noting, “I've wanted to make films for such a long time; now that we’ve received such kind and enthusiastic response to REAL ARTISTS, I have the confidence to nurture my ambitions. 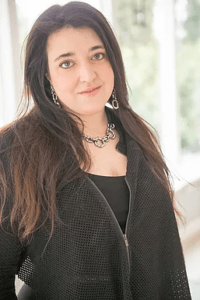 Learn more about Cameo Wood at:

Michaela:        Welcome back to the show. I'm here with Cameo Wood, and we're gonna talk about working blind for a year, and how our intuition really helps. And when I say working blind, I don't mean literally she didn't have any sight. What I mean is that she creates movies. She is a producer, a director, scriptwriter, she does distribution. So all the different stages of the movie. And as we're going to talk about she doesn't know when she's doing something on a particular day what it's gonna look like for a year's time.

So she has to rely on her intuition, and that's why I said she's working blind a fair amount of the time. So we're gonna go into that. And if you've ever made videos, and or watched movies, and wondered how the heck did they do those things, and what's behind the scenes on that, we're gonna delve into some of that, and how our intuition helps with that. And some of the more practical things like how she hires people for movies. And some disasters and success stories she had there where as she paid attention to her intuition, or ignored it. So welcome Cameo.

Michaela:        Yeah, I'm glad you're here. So you have a lot of hats you wear in your movies. And you've released… For those of you people listening who don't know Cameo, she's done several movies. And you said you’re working on about five right now is it…?