JP Sears talks about “How I Shifted from Small Self to My True Self in Business (Using Intuition and Comedy) with JP Sears” in this episode of the Intuitive Leadership Mastery Podcast, with host Michael Light.

“I think on the surface appears to be something very different than comedic work. Yet honestly, it's incredibly related because the comedic work that I do; based on my delusional point of view. I'm using the language of comedy to simply deliver deeper perspectives and the deeper perspective is around human nature that things we do individually, society wise as well that those things that we do that's more in the undercurrent of our psyche in our heart.” – JP Sears 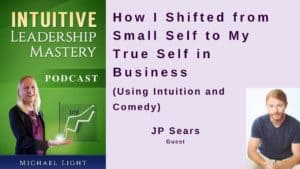 Mentioned in the episode:

JP Sears is an emotional healing coach, YouTuber, author, international teacher, speaker at events, world traveler, and curious student of life.  His work empowers people to live more meaningful lives.  JP is the author of “How To Be Ultra Spiritual,” (Sounds True Publishing, release date of March 7th, 2017).  He is very active with his online videos where he encourages healing and growth through his humorous and entertainingly informative videos, including his hit Ultra Spiritual comedy series, which has accumulated over 100 million views.  You can learn more about JP and his work at AwakenWithJP.com.

Learn more about JP Sears at:

Michael:          Welcome back to the show. I'm here with JP Sears, world famous video comedian. Over two hundred million, many millions of episodes are being watched on YouTube. If you haven't seen them, they are very funny. Poking fun of some new age stuff. And he just came out with a book as well which caused by the same name as YouTube channel, ‘Ultra Spiritual’.

And we're going to be talking today about how he got started on releasing his comedy videos and how he overcame the fear that he had before he released his first video. How he evaluates business decisions and directions based on his intuition and hearts. And how he got started using intuition in his twenty's.

And we’ll also dig into some videos he was nervous about releasing and even a video he deleted. So, that's coming up in the episode. And also, fears he overcame with writing a book and why he decided to write it.

So, great to have you on the show J.P.

Michael:          Yes, so you have an amazing YouTube channel. I have split myself laughing and probably peed in my pants watching some of these videos. But it seems a strange thing to do. You were like a healer or a coach before you started releasing videos.